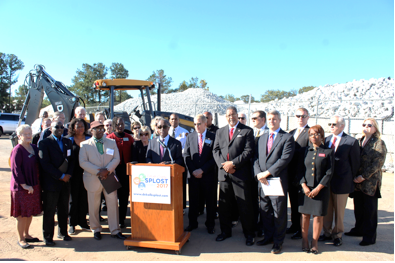 DECATUR, Ga. – Today, DeKalb CEO Michael Thurmond, members of the DeKalb County Board of Commissioners, and mayors from the 12 cities located within DeKalb County announced early voting had begun on three referendums in advance of general Election Day on Nov. 7.

The ballot questions include:

Over the six-year term of the SPLOST sales tax, DeKalb County is expected to receive $388 million, with the 12 cities receiving a portion of $248.7 million based on population.

If the referendums are passed, there will be a one-percent increase in sales taxes. However, the SPLOST will not apply to sales tax on unprepared food and prescription medicine. Also, all homeowners would receive a reduction in their property taxes by the EHOST.

“If approved by the voters, the collaboration of county and city leaders will result in an opportunity to address some of the infrastructure needs we face,” said DeKalb CEO Michael Thurmond.

For DeKalb County, the projects to be funded by SPLOST include:

For more information on the DeKalb County SPLOST, go to www.dekalbsplost.com.

For more information about the election, go to www.dekalbvotes.com.

The Arabia Mountain Rangers are providing s’mores and hot cocoa by a campfire. This will be followed by a short hike to the rock outcrop during the twilight hours to see the Moon rise. Food and Drink Supply are limited. Register online by emailing ArabiaRanger@gmail.com, Subject: Campfire